Amidst all the frantic last minute preparations for our Swn stage we've got a tad behind with the previews. Our grasp of the English language is declining in parallel with lack of sleep, but here are a few words about the last two bands playing our stage (probably not in actual coherent sentences, but still): Samoans

Samoans have been mentioned a fair few times on our blog over the past few months, a clear sign either of them being a very active band, or just us being a little bit obsessed. Or a bit of both actually. Probably helps that we're putting out a vinyl split with them and SNFAS as our second release too, which sort of comes under the 'obsession' heading. Swn festival compared Samoans to the likes of Secondsmile and Reuben which is pretty spot on. While still a relatively new band, they've already racked up an impressive number of achievements to their name in 2010, while remaining entirely modest about it all, as comfortable playing intimate gigs in tiny venues as they are opening festival stages. A good example of how interlinked the Cardiff music scene is, the various members of Samoans are actually playing this weekend no less than three times in several different guises - drummer Tal is actually playing twice this evening, opening the Model Inn with Goodtime Boys before his set with Samoans later on in the evening. They're a band that've been with us since the early days of Barely Regal, and have always been incredibly supportive of everything we've done, so it's great to have them playing our Swn stage. Yucatan 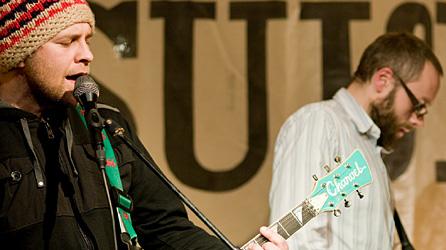 Making a rare Cardiff performance, Yucatan will be bringing the evening to a close, headlining our stage at 12:15am. They definitely win the prize for effort, having made the pilgrimage all the way from North Wales to play (considerably more hassle than the 15 minute walk/drive we're looking at from Cathays). If previous gigs are anything to go by they won't be travelling lightly; bringing with them all manner of guitars, glocks, synths, bells and even a string section. Sounds superfluous,  but all are essential components of some of the best post-rock you'll hear this side of the river Severn. Help make them feel vindicated in venturing south for the weekend by showing your face at Dempseys for an epic closer, and an inevitably incredible set to cap your evening whether you're planning on sleeping or drinking the rest of the night away. We'll probably be doing both.

Like I said, the ability to write coherently was evading us there towards the end, but hopefully these few posts have helped convince you to check out at least a few of the bands playing our stage over the course of the evening. 6 hours to go...(!).