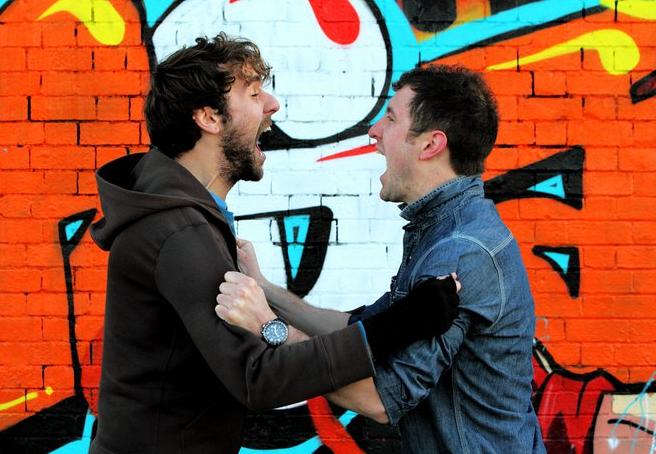 It’s been a while since we’ve given a proper update or our forthcoming third release, the SNFAS vs Samoans split…which makes it all the more embarrassing that after all that time we STILL couldn’t come up with a half-decent title for this blog post. I’d like to say that this is because we’ve been purposefully trying to maintain an air of mystery, and build ‘hype’ or ‘buzz’ for the release by keeping you guessing, but it’s actually because we’ve been mostly holding meetings about the release at the pub, which inevitably leads to intense debates, mostly about which pub to go to. Luckily though, a after lot of hard work from all involved (and a WHOLE lot of emailing),  the wheels are at last properly set in motion for the split single release, and we've actually been able to find the time to blog about it. This means we have all sorts of good news to impart: First off, we’re pretty excited to announce we’ve set a date for the split single launch, which is going to be the 18th of March, with obligatory launch party at Clwb Ifor Bach that night. . Samoans and Strange News will both obviously be doing sets at the gig, with support from The Phantom Theory. Well worth getting down early to A: catch all the bands, and B: avoid having to fight over your fellow gig-goers to get your hands on a copy of the split. Poster coming soon, courtesy of Dan Lazenby, who did all the artwork for the vinyl itself, which will be adorning the hallowed walls of all the finest eateries in the Cathays/Roath area (not to mention this here blog) in the not-too-distant future. Speaking of Dan Lazenby, while we eagerly await the imminent arrival of the test pressings, we have a few sneak peaks of the split artwork for you: 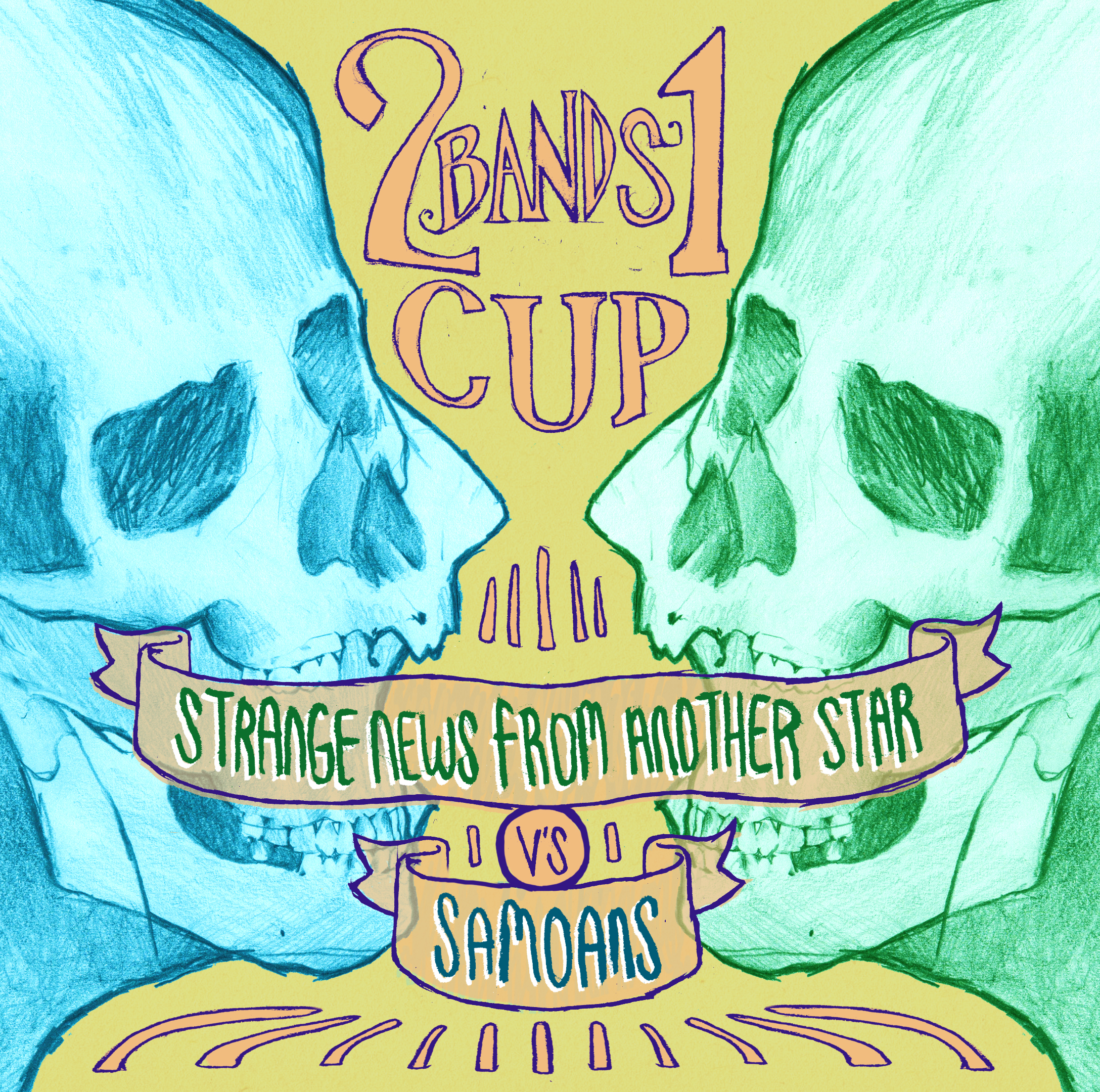 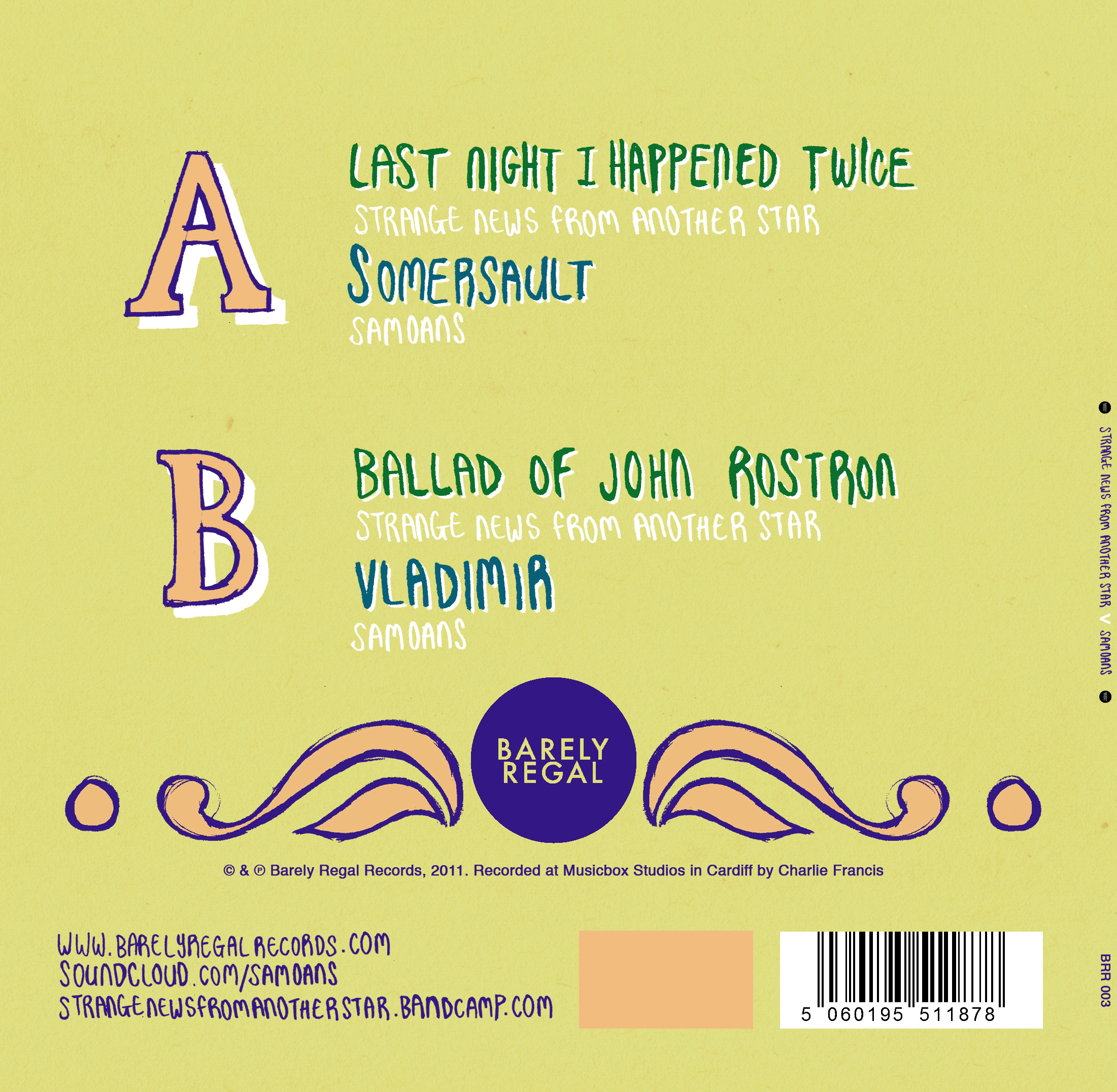 ...which hopefully you'll be as excited as us to see on the finished 7" vinyl sleeves when the final copies arrive. As you can see, we opted to go against the standard format of one band to a side, which means that even if you’re too lazy to flip the vinyl over (or listening through to track 3 if you’re listening to the digital versions) you can’t avoid listening to both bands. If the artwork alone isn’t enough to get you fully stoked for the release, you can preview one of the Samoans tracks from the split, 'Vladmir', over on their facebook page, and watch the video for 'The Ballad of John Rostron' by Strange News here. We'll have the full thing up to stream on spotify and our bandcamp closer to the 18th. Finally, the impending arrival of the final copies of the vinyl heralds the start of us being able to sort out press for the release too, meaning that the coming week will probably involve a Christmas-scale wrapping effort to get all the promos ready. We’ll be once again indulging our obsession with brown paper and string parcels in search of the review-shaped pot of gold at the end of the rainbow that is the post office queue. Well, not literally at the end of the post office queue, unless the nice old lady that works in the post office down the Bay happens to write reviews for NME on the side, which is a prospect I haven’t ruled out. As per always, if you’re interested in reviewing the split, give us a shout at press@barelyregalrecords.com. Speaking of ways to spend your weekend, you can read the lyrics for the first track off the split by Strange News on Jimmy’s tumblr. Advance warning – they’re NSFW, or radio play for that matter.