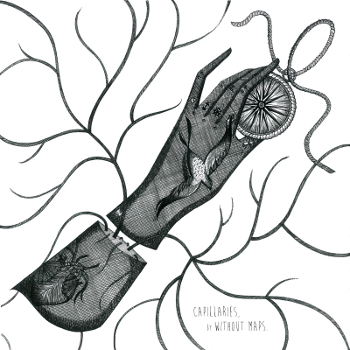 As promised, it’s about time that we (finally!) spilled the beans on our next release – Without Maps debut album, “Capillaries”. Much like Theo's debut album, this is one that we’ve had waiting in the wings for a good while now, slowly maturing like a fine wine, to the point where we’re excited to announce that it’ll finally be ready for your consumption on the 25th March. The album will be out on that date on both CD and digital download, numbering a full 10 tracks of post-punk  joy which evoke everything from Braid to Blood Brothers (which, with reference points like that, should leave you in little doubt as to why they’re one of our favourite new bands!). For those of you who want to listen to the whole album now (and believe me, you do), you can pre-order the CD album from barelyregalrecords.bandcamp.com, which comes with an instant download of all 10 tracks ahead of the release date. If you’re either strapped for cash, or just need a little more convincing that purchasing the record is a really great idea (which it most certainly is), then you can download two songs for free first via that very same link. To coincide with news of the album release, the lads have announced a number of live dates in March/April, as well as news of a full UK tour in May with Bayoné in May (full dates TBA):

This release marks a fairly big milestone for us as it’s not only the first release we’ll be putting out by Without Maps, but also the first proper release we’ll be working on with the band’s own label, 49s v Dolphins Records. How it’s taken us so bloody long to team up on something properly is quite surprising (or at least it would be, were it not for our reputation as serial procrastinators), but it’s great to be working with another label that we really love and admire, and most importantly one that shares our love of cutting and sticking things – if we had a joint family crest it would almost certainly involve scissors and glue (and probably the word “WUFT” somewhere).  In fact, as we speak Nick and Rory are gluing together the cases for the CDs (featuring the incredible artwork above by Carrie Sterland) - photos to follow soon!