Apparently this year we’ve skipped Spring and gone straight from Winter to Summer. This would be brilliant news if it wasn’t for the fact we’ve already planned for spend every evening for the foreseeable future indoors watching bands. Maybe we’ll take up smoking for the summer so we can go to gigs and still have a good reason spend a healthy amount of time outdoors enjoying the sun (we could just go outside anyway inbetween bands without the need to resort to vices like cigarettes, but to be honest ‘I’m just going outside for a second hand smoke’ just doesn’t have the same ring to it). Either that or maybe we could open Cardiff’s first outdoors venue (a financially viable project for probably around 7 of 365 days a year). Definitely not a complaint mind – if we weren’t already stoked enough about some of the incredible gigs coming up, then we definitely after now that we can walk down to them in sweltering heat (temperatures comparable to Barcelona apparently, if the reputable journalistic source that is the Metro is to be believed). Props to Cardiff promoters/labels etc who are putting on some great shows in the coming weeks. Here are a few we’re particularly excited about: TONIGHT – Saturday’s Kids Record Release Party (Undertone Basement): 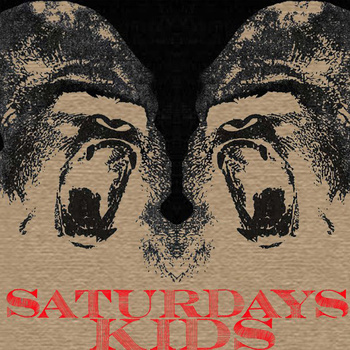 A chance to catch youthful punk outfit Saturday's Kids (and purchase their new 10") before they head off on tour for three weeks. The line-up for this show is pretty great, especially if you like your hardcore minus shit beatdowns and meathead fans - support comes from Harbour, Facel Vega and Oui Messy. Last time we saw Facel Vega was about three years ago supporting Olafur Arnalds, so we're very much looking forward to catching them again - especially since I discovered they have a tonne of stuff up on their website for free download, which I've been listening to on repeat for the last couple of days. This starts in like under an hour's time, so if you fancy going you should probably get changed and eat now or something so you're ready in time. If  you've already changed/eaten maybe you should do it again, just to be sure. TOMORROW – Paper Aeroplanes w/ Evening Chorus and Alexander Comana (Clwb Ifor Bach): Very excited to see folk duo Paper Aeroplanes make their triumphant return to Cardiff at Clwb tomorrow, supporting by two of our favourite local acts. Their last couple of shows were completely sold out so to avoid disappointment make sure to plan ahead and get tickets from here. Saturday 9 April – Meilir ‘Cellar Songs’ EP Launch Show (Capel Ebenezer): Another great release show, the third in the space of three days, this time hosted in the atmospheric setting of Capel Ebenezer (which is on Charles Street apparently). Pretty much the perfect setting to catch Meilir play his own brand of hauntingly beautiful, stripped down folk. Aside from the fact that he's bloody brilliant live (and likely to be even more so in the unusual setting he's picked for the launch), Meilir is one of the nicest guys you'll ever meet, which I feel no shame in mentioning gratuitously in an attempt to guilt trip people into coming. Plus apparently there are ' a limited amount of complementary drinks' provided (!). Friday 15 April – Brontide (Undertone Basement): Inbetween being a pro Radio 1 DJ, writing for various websites, and running her own blog, Jen Long somehow finds the time to put on great shows in Cardiff (under her alter ego 'Flux=Rad'). This next one looks to be pretty fantastic, with math-rock 3 piece Brontide gracing the Undertone basement with their presence, plus some great support bands to be announced. We'll be DJing in-between bands, which could be disastrous given my penchant for nu-metal, but last time we DJ'd it went surpsingly well, and was a good laugh so we're looking forward to doing it again (by 'went surprisingly well' I mean 'we drank a lot of beer, sort of got the hang of using the decks, and got to play Grown Ups and Algernon Cadwallader'). Expect a repeat of that on the 15th. Saturday 16 April – Jeniferever w/ Among Brothers (Buffalo): 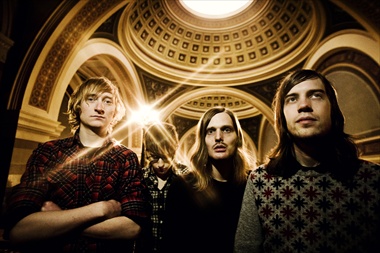 Fuck. Yes. Not only are one of our favourite bands touring but they're doing a Cardiff date AND we've been asked to support them AND it's on the weekend so we can relax and partake in some post-show alcoholism. Excitement overload. Wednesday 27 April - Flux=Rad Japan Fundraiser (Kutosis/Golden Grrrls/Effort) Another great Flux=Rad show, this time with all the proceeds going to the Red Cross' relief work in Japan. If the cause alone wasn't enough to convince you to come down the fact it's both Effort and Kutosis' first gig of the year in Cardiff hopefully should. Plus there's going to be LOADS of extra fundraising stuff going on, including cakes, origami lessons from Cardiff Craft, and a Flux=Rad compilation CD. We sadly can't make it as we're  touring with Among Brothers that week, but we'll be donating some Barely Regal/AB swag ahead of time to help raise monies at the show. A special shout out also to run, Walk! and Samoans, both of whom were fucking incredible on Monday. If anyone outside of Cardiff has a chance to catch them on tour you definitely should.