Apparently it's 2010 in nearly a weeks time...where the hell did the entirety of 2009 go?! This post was originally meant to cover both looking back on this year, and looking forward to the next decade, but it got a bit lengthy so we’ve split it down into two slightly more manageable chunks. So first, a quick look back at 2009:   Without a doubt, 2009 has been an interesting year for music and the local scene here in Cardiff. We’ve had some ridiculous gigs for a start, and I’ve found myself on more than one occasions saying ‘this is the best gig I’ve been to in ages’ (the only one that springs to mind at the moment was Cursive at Clwb back in May, but there have definitely been others). It’s nice to see tour dates in Wales cropping up more and more on bands touring schedules. Aside from great gigs and some great releases, the music industry has seen a pretty big shake-up. The recession, new online platforms and the like have all turned things a little on their head, and left everyone pretty unsure of what happens next. We’ve even seen people questioning the role and viability of the record label in its current format, and whether they’re even needed in 2010. A pretty interesting, if not daunting time for Barely Regal to join the fray. I think the most impressive thing is that a lot of labels that people probably expected (or expected themselves) to disappear have completely weathered the storm, and come out the other end even stronger. Kev from Big Scary Monsters actually said this has been one of his most enjoyable years yet. As far as Barely Regal goes, it’s of course been an eventful couple of months, starting off which us saying ‘here’s a crazy idea, let’s start a record label’, and ending with us having a compilation in the pipeline for release in March. It’s taken us quite a while to get to the point where we actually have a planned release and idea of where we want to go, and while it may not look on the surface like we’ve been doing a lot, we’ve managed to fair bit acheived behind the scenes:sorting out tracks with bands for the release, sorting out a load of legal stuff, getting advice from all sorts out people and places. Probably doesn’t sound like a lot on face value, but we feel like we’ve got a lot done and things have been picking up speed of late, particularly in the last few months. We’ve met a load of nice people already, and hopefully will meet a load more. First up. list-age: everyone seems to be doing a top albums of the year list, so it's probably around time we threw in our two cents. Matt: 1. Phoenix - Wolfgang Amadeus Phoenix. 2. Jeniferever - Spring Tides. 3. Tegan and Sarah - Sainthood 4. Owen - New Leaves 5. Yeah Yeah Yeahs - It's Blitz Isaac: 1. Cursive - Mama, I'm Swollen 2. Bat for Lashes - Two Suns 3. Mew - No More Stories 4. Sweet Baboo - Hello Wave 5. And So I Watch You From Afar - S/T Back to Matt! Oh, and here is my quote of the year, taken from an interview with Erlend Oye (of 'Kings of Convenience' fame) on Pitchfork, about his experience of watching the XX live: 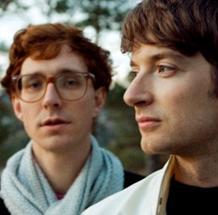 "The latest band I've really liked was the xx. I just saw them live in Dublin. They were playing well, but I got annoyed by the people watching the concert-- all these people were talking. I guess they were attracted by the hype, but weren't interested in listening to the music. They just wanted to be there. I just thought, "This is how it is to be hyped, isn't it?" You know, when people come to your show just because they realize they should be there. They don't really want to listen to you. That was kind of awful; people who wanted to listen to it weren't able to, because people behind them were just talking." Perfectly sums up my thoughts entirely on a few gigs I've been to this year which nearly moved me to angry rants on here. Luckily not too many gigs though, as I'd say in general there've been some excellent shows with great atmosphere in Cardiff of late.